HostGator Sucks but This HostGator Alternative Is Brilliant!

Are you wondering why HostGator sucks?

Either way, I've got some interesting points for you to consider. Hopefully, I can persuade you to jump ship or dodge a bullet with this slightly unorthodox HostGator review!

Blog Champs is reader-supported. By following through with a purchase, I may earn a commission at no expense to you. Thank you for your support.

HostGator Sucks but This HostGator Alternative Is Brilliant! 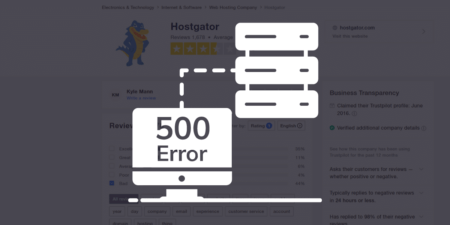 HostGator is a popular WordPress hosting provider that scales from easy to expert. The downside is that HostGator sucks and isn't worth a minute of your time.

Are you wondering why HostGator sucks?

Either way, I've got some interesting points for you to consider. Hopefully, I can persuade you to jump ship or dodge a bullet with this slightly unorthodox HostGator review!

Long story short, HostGator is crap. I advise avoiding HostGator at all costs. They're owned by a notoriously crummy company, Newfold Digital, which speaks volumes as to why HostGator is so heavily frowned upon. And to make things worse, HostGator's renewal prices are astronomical!

Alternatively, ScalaHosting provides an even CHEAPER cPanel hosting experience and is 100x more reputable than HostGator. And as a bonus, they've just recently upgraded many of their packages with MORE resources. ScalaHosting is truly a hidden gem.

HostGator was founded in 2002 by Brent Oxley and was named one of the fastest-growing companies in the United States by Inc. Magazine in 2008. With offices in Houston and Austin, Texas, HostGator offers shared hosting, reseller hosting, virtual private servers, and dedicated hosting.

No matter where you look, HostGator complaints are numerous. You don't have to look very hard to see why HostGator is crap. People are simply fed up with them. But why, you ask?

They're Owned by Newfold Digital

What's that have to do with anything, you ask? Well, for starters, HostGator was initially ruined by EIG, as they have a knack for buying smaller hosting companies and wrecking them. And nothing has changed since the recent acquisitions. They get negative complaints on a weekly basis on Trustpilot.

I actually tried performance-testing their managed WordPress plan back in October 2021 but was so confused with their platform that I gave up. Here was my experience:

Mind you, I've used almost every popular WordPress host over the last seven years, and this was the worst, most confusing hosting environment I've ever seen.

To reiterate my last point, the support was almost non-existent. It was pitiful and quite frustrating, to be honest. And I'm not the only one to notice this.

If quick and knowledgeable support is important to you, you'll want to avoid HostGator at all costs. Run for the hills!

Go ahead and search around. It isn't hard to find people complaining about HostGator's slow speeds. From customer reviews to forums to performance tests, HostGator always falls short.

HostGator jams everyone into their crappy shared servers with their “cheap” introductory prices and then upsells their dedicated servers after you complain about poor performance.

Here's a scenario for you. You're fed up with HostGator's slow performance, so you decide to create a support ticket about it. After 10 minutes of waiting, their answer is to upgrade your plan!

Just take a look at these Trustpilot reviews. HostGator's support only wants to get you on their dedicated servers that won't even solve your problem. I promise you, Cloudways does not do this!

That last one is pretty ridiculous, isn't it? Apparently, you can't upgrade from shared hosting to cloud hosting. You need to buy a whole NEW plan and forfeit your previous investment! Ha!

Forget that. Just get cloud hosting from MDDHosting for the same price and upgrade your RAM and CPU at your own will, right in the control panel, without even opening a ticket.

No matter where you look, you'll find hundreds of negative reviews for HostGator. There are so many HostGator complaints on the internet, that it's a miracle they're still in business.

You can read more horror stories on WebHostingGeeks, and ConsumerAffairs. And if that doesn't convince you that HostGator sucks, maybe my next point will.

It's a Really Poor Value

HostGator's full-price WordPress plans range from $9.95/month to $14.95/month depending on the term length.

HostGator's price tag is actually on par with most hosting companies. For reference, HostArmada's Start Dock plan ranges from $9.95/month to $12.95/month depending on term length. My point is that HostGator charges a similar rate compared to other popular hosts but offers less in the way of performance and customer support. It really is a lousy deal.

But alright, hopefully, I've convinced you enough to pass on HostGator because I've got some stellar HostGator alternatives for you to consider.

Since I've already mentioned them, I figured I'd start with one of my favorite WordPress hosting providers, HostArmada. They placed 5th in terms of speed and stability amongst 19 other popular WordPress hosts that I tested. HostArmada is the best alternative to HostGator and the kicker is that they are also the cheapest host with glowing user reviews.

Next up, we have Cloudways (the host that I use). I really can't say enough good things about Cloudways. They were the fastest host I tested, and I love the pay-as-you-go pricing. And when I need more resources, I can increase the RAM and CPU myself without opening a support ticket! I even performed the migration myself using their plugin. I had my website up and running on Cloudways within 10 minutes without paying a single penny!

During my tests, I found myself resonating with Templ really well. Their control panel was so damn intuitive; I could've sworn they were reading my mind. I created my WordPress website, connected my domain, and everything was live with minutes. I even chatted with support about different features like their Google Cloud CDN. I was so impressed with Templ I almost chose them over Cloudways!

Pressable was another host I considered switching to from SiteGround. They placed 2nd on my tests, and their support was phenomenal.

MDDHosting is another favorite host of mine. Their managed cloud hosting plans are completely scalable with seamless upgrades. You can instantly scale your plan from their self-service portal, and you will only be charged for the pro-rated difference between the two plans. The ability to upgrade or downgrade your resources (CPU and RAM) is just so darn convenient!

Well, let's face it, HostGator sucks. Many of the top WordPress blogs recommend them, which drives me nuts. Why would any self-respecting person recommend HostGator? The amount of HostGator complaints is staggering.

But again, this is the exact reason I started BlogChamps – to help people avoid this crap by raising awareness. Hopefully, this article has been somewhat helpful.

What do you think? Do you have any beef with HostGator? Or are you a fan? Let me hear it in the comments below!

Forced out of Colorado because of the housing market, Kyle now writes WordPress guides out of his Florida apartment, hoping one day to return to the mountains from which he came.

After many years with SiteGround, I finally made the switch, and I'm glad I did. Read the full story here.

Blog Champs is the number one hub for blogging resources, hosting research, writing tutorials, WordPress help, SEO guides, CSS tricks, and content creation tools. Discover something new today, and learn how to blog like a champion.